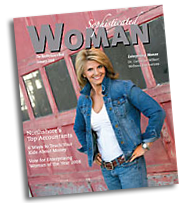 All entries must be received by February 26, 2010. Only one vote per person may be cast. All voters must be 18 years or older.

This site uses Akismet to reduce spam. Learn how your comment data is processed.